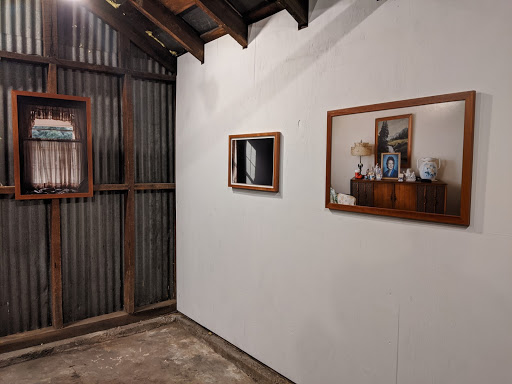 On Saturday, January 18th I made my first visit to Rump Gallery for the opening of artist Trish Gibson’s show, I Wore Her All Around Me. For this visit, I rode deep into Richmond’s South Highland Park neighborhood to a corner lot house with a small, dark tin shed in the backyard. The atmosphere was as gloomy as you could expect in the middle of January: already dark by 5pm, cold as it can be without turning the rain to snow. However, warm light was pouring onto the street from the shed’s open sliding door, under the laser cut sign designating Rump Gallery. 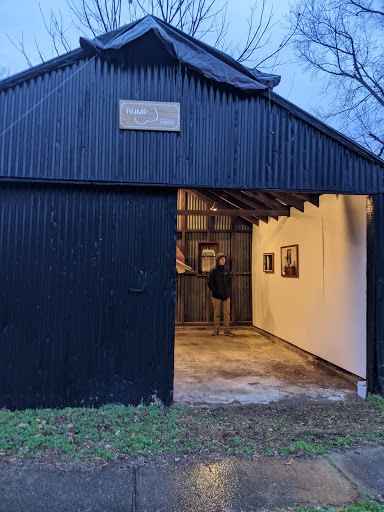 Swept clear of old construction supplies and decades of debris, this little space now entertains a creative exchange. One wall has been paneled and whitewashed while the rest of the rustic structure has been left bare. All three available walls are hung with an impressive and cohesive installation by Trish Gibson, featuring five photographs, four poems, and several supporting objects. I will return to the art–of which much deserves to be said–but while taking in the exhibition, I had the pleasure of speaking with the co-directors of the space, who provided great insight into what they have been able to offer to enrich this context.

Noah Hook (Painting and Printmaking ‘19) and Kim Peters (Graphic Design ‘19) are both VCU alumni. Post graduation, they started renting the house at 2320 5th Avenue with two other roommates and were instantly aware of the quirky potential of the 280 square foot space tacked on the backside of the property. Establishing Rump was first a physical effort: clearing out vines, paint, and an old mattress in the heat of summer in order to make the space hospitable. Since then, the pair have been diligent in keeping up a regular show rotation–usually three weeks on, one week off–curating from online submissions that have come mainly from artists with local ties.

A goal of Hook’s and Peters’ is to provide an exhibition and event platform alternative to those of the larger, more established galleries in the city. For the artist hosted, it is a cheap and accessible way to realize and present a body of work. It also allows the artist to act in collaboration with the space, which brings to bear a Richmond-particular character–there is little to gain by way of visual neutrality amidst the exposed beams and weathered concrete floor of Rump. The shed is also situated amongst yards and longstanding neighbors, rather than businesses or high-rise apartments. I was curious to ask the codirectors how this anomaly has been received by their neighbors.

Hook and Peters say that the response to Rump has been positive, and they have been pleased to have several conversations with people who have been invited to engage. Interestingly, the first thing that gave onlookers pause was the fact that the grass was cut and everything just looked nice. Previously, the yard had been majorly neglected and the weeds grew high. Now, not only is an eyesore remedied, but the same kept site is host to regular hospitality events. Known to some as ‘receptions,’ these events simply provide a chance to sit by the fire and enjoy a free beer.  Some curious local teenagers have experienced a full-length artistic performance for the first time; other residents have been welcomed enough to freely voice their concerns about topics like the monuments.

I was impressed by the attention to detail in generosity. Peters and Hook said that they are careful to monitor noise levels so that these art-parties never become a nuisance. On the cold day that I got to talk with them, there was a ceramic heater in the corner by which I could warm my hands. Rump acknowledges that a space for art can absolutely be a space for flesh-and-blood, communal-emotional humans too.

The building has a very particular visual presence and meaning to bear on the work it hosts; in the case of Trish Gibson’s installation, I was delighted to see how well the two came together. The artist’s website describes the work as “[revolving] around interpersonal relationships, southern traditions, oral retellings, and the complicated nature of excavated histories.” Certainly, the kind of old southern property that Rump sits on embodies a fat portion of history that Trish’s work uncovers in a veiled yet personal way.

To highlight some of the exhibition’s poignant moments of intersection: one mounted photograph portrays some lonely white patio chairs marooned in a leaf-littered yard. This is hung between the gallery’s only window and door, both white-rimmed and open to the property’s backyard. All of the photographs have a haunting sense of being deeply familiar (especially to anyone raised in the rural south), as well as particular to a certain family and its trauma. Especially when coupled with the writing included in the exhibition, these photographs present like memoir, not detached documentation. 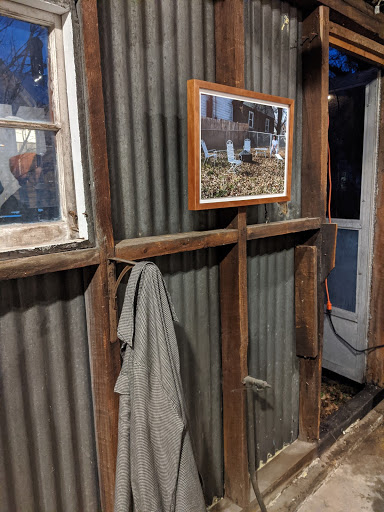 By ‘the writing included in the exhibition,’ I am referring to the poems tacked to the beams of this same wall. Hung above some dried roses, one of them reads:

was raised in a town cut

in to appalachia – the tip-top of Tennessee. My

relatives spent their lives on their knees.

I grew up on

I was wound – so I sprung up right over their fences. 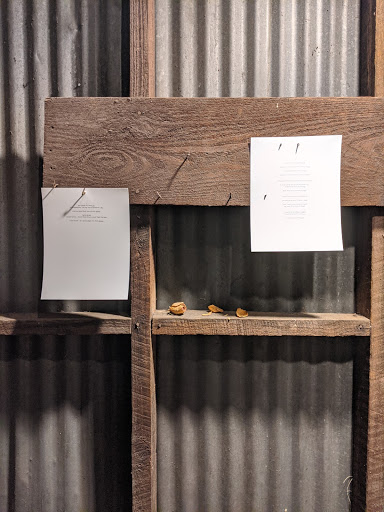 Verses like these, coupled with the sparsely populated images, present a powerful impression of both intimacy and alienation, beauty and suffocation. Like Rump itself, they are humble in scale and scope. The photographs tell a story in terms of personal objects, filtered light, and floral fabrics. Through unassuming means, brokenness and abuse are expressed gently, with a generosity to both the storyteller and the audience.

The whole tone of the show is decidedly bittersweet: expressing a sense of ownership of a cultural heritage while embodying a means of escape. It is a complicated matter to reconcile, just as it can be difficult to bring together text and images, growth and mourning, or personal stories and common experience. Through the cumulative efforts of the Rump team and Trish Gibson, we can see reconciliations not only theorized, but embodied and embedded in a community where art is richly but humbly connected to real lives.

I Wore Her All Around Me will close with a reception on February 8th, from 5-7pm at 2320 5th Avenue. Between now and then, visits may be made by appointment only.