The BODY of WORK

In response to Richard Haley’s exhibition at Shockoe Artspace, Inhabiting the Space Underneath the Skin: Things to Do In between Sleeping and Making Breathing a Voluntary Activity. Works 2003-2021

Richard Haley has been making art with and about his working body for the greater part of two decades. The sum total of this body of work yields a constellation of meaningful responses spinning out from a few pertinent questions. These come to mind first, for me:

What is my body? What is its work? …How is that working for all of us?

Even in an age that prioritizes leisure, we are so frequently starved for an interruption in the digital deluge which draws our attention out of proper orbit. I am grateful to the artist for providing an oasis enabling contemplative curiosity and able-bodied attentiveness to the issues at hand. Given this opportunity, let’s begin to walk out the meaning implicit in the terms of the questions, followed by how they are given explicit form through the character of the work.

So long as we are awake [making anything at all a voluntary activity], our bodies become vessels and instruments of consciousness and desire. Insofar as an activity is bodily, it aims at engaging externals toward some desired end. This is work. It is characteristic to what we are. We also use ‘work’ to designate proper and effective function, but this second sense of the word does not square up so nicely with our sense of self or experience in the world. Somewhere between finitude and failure, futility enters the aspirations that comprise human being and doing.

If we turn these propositions into a grocery list of concepts, they begin to resemble ingredients for Haley’s survey exhibition: bodies, vessels, tools, aspirations, work, environment, futility…. With this essay, I am not formulating a straightforward review. Instead, I am grasping to catch the gist and run. This may make for opaque reading apart from seeing the show, but, having done so, I hope this piece will serve as a dialogical accompaniment. (You may find some of the works on view through the artist’s website.)

Broad observations in hand, we are off to the races.

The human body features prominently in Haley’s work. Most often, it is his own body, implied through the presence of props and prosthetic replicas. In contrast to the slick, sexualized images abounding elsewhere, Haley’s are startlingly earthy, fragile, and visceral. Crude is one possible descriptor. He reflected in a 2014 article that ‘crude’ contains at least three connotations: vulgarity, humility, and approximation.1 These can be informative lenses through which to consider the work:

As far as obscenity goes, there is nothing going on along the lines of Hollywood’s usual transgressions–no violence, sex, or gore (except for some “favorite scabs,” a topic of interest to young boys rather than mature audiences). Even so, the exhibition may elicit feelings ranging from discomfort to indignation. Discomfort is appropriate–dealing honestly with the experience of living beneath skin–but indignation suggests an instinctual reaction to how unlike Hollywood the work is. Incarnation is many things: widely offensive and least of all entertaining.

As the Son of Man took on flesh with kenotic intent, Haley treats his own image with dirt-and-worms humility. It is unshaved and subject to decay. The most lifelike silicone casts still have raw edges, employed in actions in view of mortality. The office of artist–that exalted creative power–is unexpectedly identified with weakness without despair. Even gentleness. 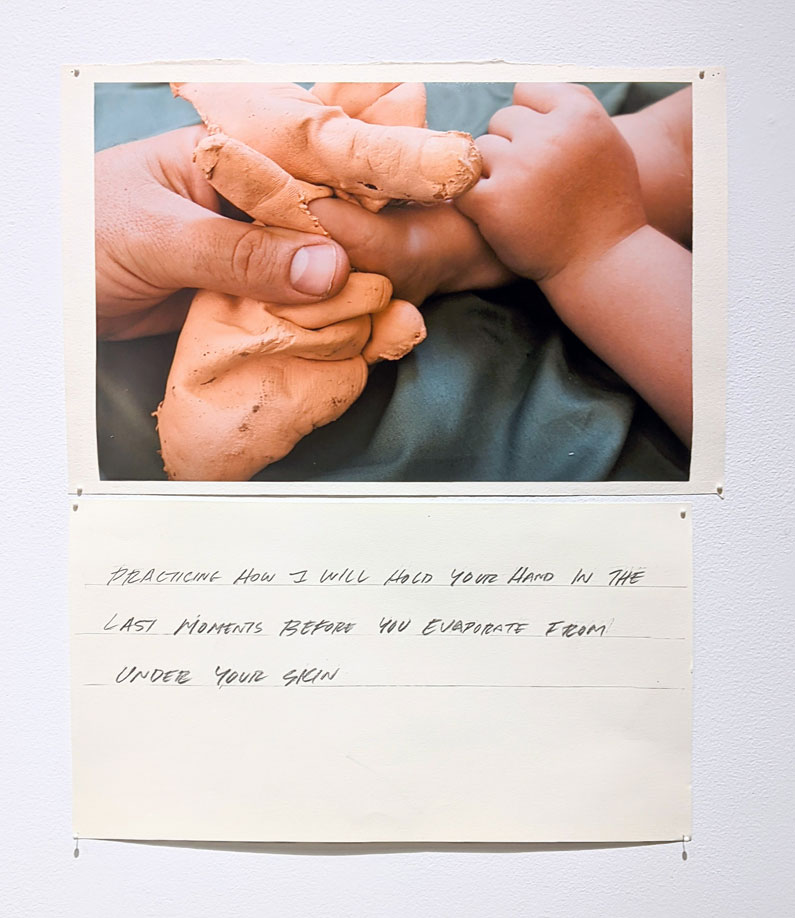 Practicing How I Will Hold Your Hand In the Last Moments Before You Evaporate From Under Your Skin, 2018, Photograph and graphite on paper edition of 3 and 1 a/p.

The surrogate objects that stand in for the artist’s body range from disturbingly lifelike to disturbingly unlifelike (cue ‘crude’ in the sense of approximation). Props like these employ bodily forms in performance–and I can’t imagine that performance was ever more central to the work of the human body than it is in the age of Instagram. Embodied life is not primarily lived but rather presented, constructed, and copy-pasted in parts. Haley literally carries out these actions through prints and moulds, powerfully enacting the phenomenon of feigned presence. Searing artificiality becomes a tacit acknowledgement of the implications of “acting” as a personal agent without a breathing body at all.

To repeat: work employs the body to engage external reality. The prime context the human body emerges from and answers to is the physical landscape. Figure-ground relationship. Where smallness meets Bigness and exerts an influence. A number of works on view feature attempts to impart influence on the land, displaying the tremendous transience of those efforts. My mind turns to Richard Long. [He said

My work is about my senses, my instinct, my own scale

Haley’s art is both like and unlike Long’s 1967 “A Line Made by Walking”. Ephemeral, yes–a trace of corporeal action. But a different kind of poetic. It smacks like a limerick. It also has to contend with an even more complex context for “placement” than that which produced land art in the 60s. Where the land meets the figure, we have the Sublime. Where our being makes and meets the infinite possibilities of the internet, something else happens. Grappling with both dimensions is what, I think, makes Haley’s performances that much more edgy/itchy. 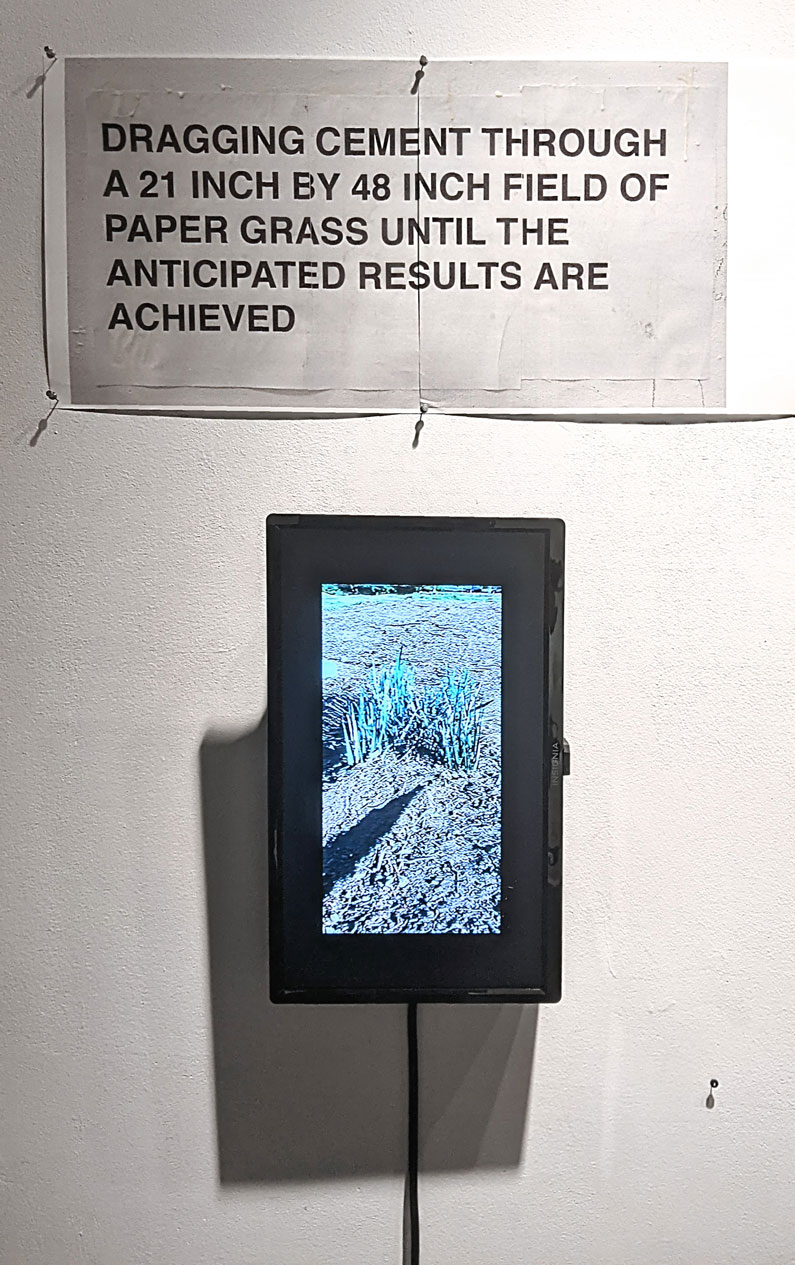 In addition to image, object, and performance, text plays a prominent role in Haley’s body of work. Hidden modestly in the form of captions and inscriptions, he proposes evocative propositions–impossibly ambitious, like the idea of preparing for death; serious as a child playing pretend. Indeed, even the shadow of mortality cannot purge these works of humor.

Humor can be a double-edged sword. It may occasion the self-forgetful surprise that generates laughter, or it could operate as a thin barrier against the threat of meaninglessness. Given the total body of Haley’s work, however, I understand its absurdity with respect to paradox, not nihilism; sincere playfulness, not memeishness. The attempt to leave an enduring mark on the landscape belies a resistance against mortality which wouldn’t occur if the final fact was futility. Even failing at the task gives way to a greater desire, to be subsumed into the landscape, to become a part of something bigger than oneself. Banality has been utterly purged from these images by the persistence of inconsummate longing.

What does it mean to butt up against impossibility? To make a xerox of the sun? To constantly contend with the failure of mastery and to metabolize that as true discovery, even art? Nothing could sustain an inquiry of sustained awareness toward our earthly contingency except for an abiding and anchoring hope–an expectation of winning vistas smiling over our broken bodies–an aspiration to greet the rising sun. At the end, this is the posture that I see unifying Haley’s body of work. 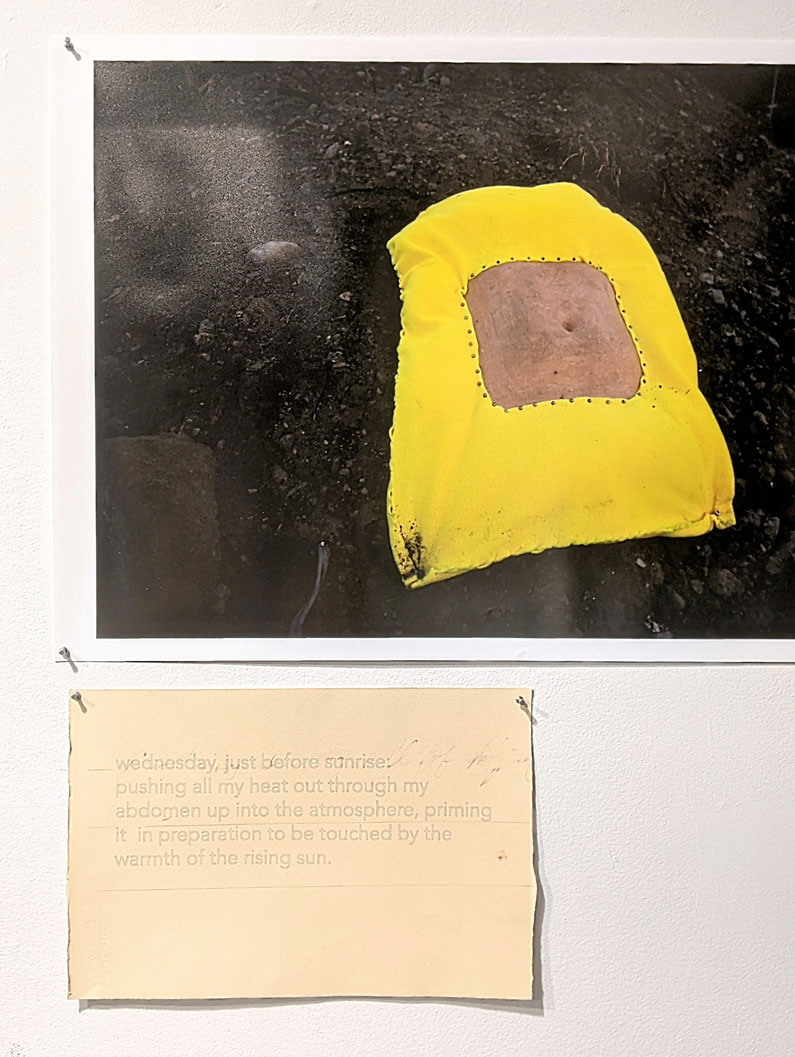