Prometheus Rising, explores the beauty of brokenness expressed through the shattered, graceful, and failed myths of yesterday. While coinciding with the Japanese Philosophies of Wabi Sabi (acceptance of transience and imperfection) and Kintsugi (treats breakage as beauty to be emphasized), I aim to reinvent aspects of these categories into present tense embodied forms, adorned in the textures and idioms of our time. The central theme of portraiture expressed through the means of broken Grecko – Roman busts serve as the foundational constant amongst the myriad of techniques, and varied perspectives of the human ideal. I’ve worked to synthesize a plurality of elements comprised of the past and present with universally recognized imagery within each painting as a specific locality that brings with it a generative power. All myth was once personal experience.

Ultimately, it seems that the free flow of information forces our histories through our screens where the faces of ages passed – revive themselves. All the paintings in this exhibition came through screens and reproductions that can and will be edited / rewritten into a brand-new mythos. Antiquity preserved digitally.

Who was that Prometheus guy, and why did he give us fire in the first place? 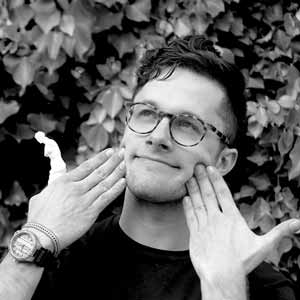 Born (1991) in Milwaukee, Wisconsin, Ian C. Hess is a Richmond based artist/curator who received in 2014 his BFA from Virginia Commonwealth University’s Painting and Printmaking department. Since that time his work has taken on a wide array of expressions, in 2015 he along with two other members founded Endeavor RVA, in December 2016 Hess shifted to full time artist / Creative Director of Endeavor Studios. Ian’s studio work has taken on many different forms, meanings, materials, and concentrations and as of recent, Hess has found in his personal work a referential focus on Grecko-Roman busts as paintings.

In studying portraiture, Ian found resonance with antiquity and iconoclasm that’s resulted in bizarre color palettes, fractured forms, and emotional expressions through recognizable imagery. While the panels he works on are treated as objects in themselves, his focus remains on working towards tromp l’oeil – while also engaging the abstract, textural use of paint itself.

When not making work, painting murals, or taking commissions – Hess is operating things at Endeavor RVA. He hopes to find as many active artists, musicians, and creatives as possible as to build the strongest artistic community possible that supports itself and the city at large. The doors at Endeavor are continually open and supportive of anyone who walks through them.