There In the Air is a stunning exhibition. I mean that, to begin with, at complete face value. One cannot fail to be impressed at the technical excellence and detail Brooklynn artist Kyle Andrew Phillips has packed into a whopping 99 oil paintings completed in only the past few years. Besides well-rendered, the content therein is variably fantastic, imaginative, radiant, and richly saturated with color. Pieces range in relative human scale from dwarfish to dwarfing (6×6 inches to 6×6 feet). Thus occupied, Eric Schindler Gallery in Richmond is nothing short of resplendent.

All that said should get you in the door, even as a passive observer. Of course, one hopes the hours of skilled artistic effort behind the show precipitate more than wide eyes and warm feelings. Indeed, for the small price of some active attention, there are richer rewards to be found. The visual variety of the exhibition stems, in part, from the combination of three separate groupings of work: remixed repetitions of a human skull, porthole windows into beautiful locales, and large atmospheric landscapes. Taken together, there runs a through-line of humor met with sincere appreciation and persistent imaginativity in the face of death.

Consider the skulls–the face of death!–which perhaps seem least likely to take themselves too seriously. One is decorated like a glowing meteor hurtling through space, another like jiggling raw egg yolk. Some reference historic painting styles, others racecar livery. Tight parameters plus repetition (again and again and again) is exactly the recipe for discovery and surprise! Phillips’ exploration is lighthearted, but grounded in a kind of seriousness that honors each piece as a crafted object. The sheer amount of work-time invested is itself a statement about what is worth doing in view of the memento mori: watching good movies, eating good meals, playing with paint for the enjoyment of others. I recently listened to a talk which highlighted how certain ancient peoples viewed bones as hopeful: a thing to carry and bury with honor in anticipation of the new life to come, like a seed. Phillips’ panoply of skulls seem to imply, then, that there is such a hope playing out in all sorts of human occasions.

The prospect of death looms more subtly in the larger landscape works, mostly through the absence of human figures (skulls or otherwise). The artists’ statement links this–and the show’s title–with the emptiness that characterized New York City during the pandemic. Of course, we all know that emptiness was heavy and damaging. But for Phillips, the space opened up through these paintings is also characterized by light and play. Some of his landscapes are more “objectively” rendered, while others are fictionally constructed–but the common root of both kinds of image is a deep appreciation of what is there to be seen. A convincing imaginator is only a first-rate observer, after all.

There In the Air is a wonderful pollinating gift from New York to Richmond. Attentive painting compounds appreciation–from artist to audience and back–for a world no less dazzling than it was before COVID-19. Without masking its complicated brokenness, Phillips paintings reflect an environment where fun is rightly a matter of life and death.

There In the Air is on view at Eric Schindler Gallery, 2305 E Broad Street, during open hours or by appointment until October 22nd, 2022. 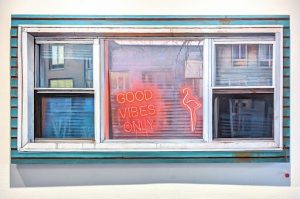 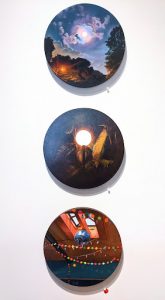 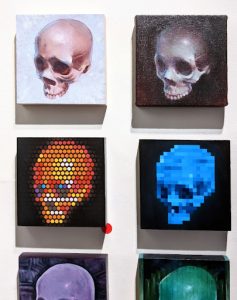 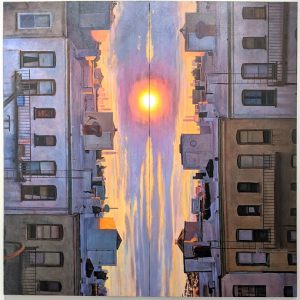