For a mid-sized city, Richmond contains an impressive variety of art repositories. We have our towering institutions, enduring commercial spaces, non-profits, pop-ups, and start-up ventures. One token of the city’s growing cultural ecosystem is the Blackburn Gallery at the Highpoint, which got off the ground with art shows in 2018. 3300 W Broad–easily recognized by the attendant mural as “the Bernie Sanders building”–was erected in 1928 as a leather factory in Scotts Addition. Nearly ten years ago Claire Accardo and David Morrison began fighting tooth and nail to acquire and renovate the building with a vision to preserve a haven for working in the city amidst rising rent prices. Today, the Highpoint functions on multiple fronts: it is a commercial art gallery, event space, and home turf for creative professionals as diverse as an architect and taxidermist.

These tenants, Accardo informed me, are close friends as well as the bread and butter of the business. Holding the task of property management alongside gallery directing allows Accardo and Morrison to generously support opportunities for artists–even limiting the gallery’s cut to 25% of art sales (a nearly unheard of rate for commercial spaces). 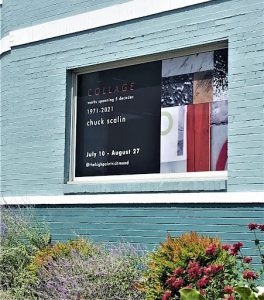 Like many other galleries in town, the Highpoint has opened up again this summer with new art on display. In this case, they have taken this joyful opportunity to highlight the career of longtime artist and educator, Chuck Scalin, with a solo show of works spanning over 50 years. Given the depth and breadth of this body of work, COLLAGE engages the totality of the Highpoint’s distinctive space.

Firstly, the Blackburn gallery is not small. The 1,800 square feet of polished floor reflects walls that soar up into a high ceiling of exposed beam–characteristic of such industrial renovations. However, Scalin’s work holds it all down by virtue of quantity, arrangement, and remarkable cohesion. An initial glance at any exhibition establishes the sense of scale and spatial “timing”; for COLLAGE, the impression is of a dynamic relationship between the works and the architecture. Each piece is modest in size–the smallest only 3×3 inches within the frame. Even so, the total installation punctuates the perimeter with moments that range from intimate to monumental. One such episode concerns the “broken grid” of photographs stacked high on the gallery wall; this arrangement draws attention both down and up, in terms of space and perceived aesthetic value, by relating the art to the ghostly remnants of the original tiled factory floor. 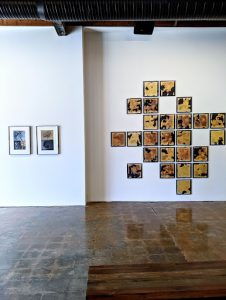 The groupings of work tell a cohesive story across space and time as well. The oldest construction on view consists of a set of four envelopes decorated with craft paper and found print material, postmarked from Chicago in 1961. Touchingly, the letters hidden therein are addressed to the artist’s now-wife. Other pieces recall Scalin’s first solo show at the VMFA in 1971. Most, however, have been completed in the past year and a half, representing both a culmination and through-line of Scalin’s extended engagement with multimedia. Insofar as each piece compositionally holds together disparate bits of material, the exhibition as a whole amounts to a larger, lifelong collage.

One explanation for this relationship is simply the continuity of Scalin’s experience; each piece bears out his respect for his mentors and the Bauhaus design principles imparted to him. More basic than this, however, is the consistent evidence of Scalin’s attitude of openness and respect for the magical possibilities of stuff as-is. I am speaking simply about the root of collage: pastiche results from gathering that begins with noticing. This language walks lock in step with the basis of craftsmanship as well, even though one might blithely assume that found, “unaltered” elements are weakly crafted. It is not the heavy-handedness of the artist that defines craftsmanship, but rather an exercised knowledge, respect, and skill with reference to the given.

Formally, Scalin’s compositions combine geometric shapes and elegant gestures with disordered, eroded surfaces. This stuff is gritty–even dirty–but it is loved. Indeed, the design is fresh and excellent because of it. There is love in those letters as there is a sort of love in each scrap preserved from perpetual inattention. I appreciate the color moments where a blue is made to sing set against some rusty object. I have been thinking about that color combination recently, specifically in relation to how the sky in this city goes impossibly electric blue at dusk–a matter of light pollution and the city’s complex dirtiness. Cue one further dimension of fittingness between Scalin’s work and the wider urban context. 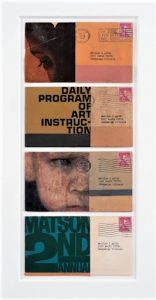 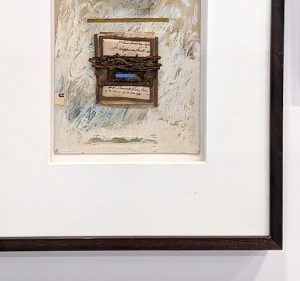 COLLAGE is on view until August 27th in the Blackburn Gallery at the Highpoint, 3300 W Broad Street, Wed-Sat 11am-6pm.