Coming up the hill on East Broad Street, one might not notice the sign hanging between two fluted columns designating Eric Schindler Gallery. I certainly never did, until I learned that one of the 19th century homes on that block contains the oldest operating commercial gallery in Richmond. Eric Schindler was founded in the early 60s by the parents of Kirsten Gray–the current owner and director. In keeping with her mother’s practice, Gray endeavors consistently to provide a platform for artists in a variety of styles and media. Between the unique, intimate setting–complete with a teeming backyard garden–and the art on display, one might expect to see something that isn’t to be found anywhere else. The current exhibition at the gallery, Miguel Carter-Fisher’s Negative Shapes, is not likely to be an exception in that regard.

Stepping into the main gallery, one enters the quiet company of a cache of figures, each engaged in some private reflection or familial contact. Their inner worlds are contained in paintings that vary in scale in relation to the viewer; from “handheld” to approximately life-sized. Each image is developed with a painterly touch that is fittingly sensitive; light-filled but soft, nuanced in color, extending patient attention on the part of the artist.

As Richmond’s art scene has developed over the past half-century, figurative painting has held an uneasy place. Carter-Fisher was raised in Richmond, but pursued education in Hartford, Connecticut and then at the New York Academy of Art in order to receive training in the classical techniques that he admires. He has since returned home, but he admits that his art has struggled to be as comfortably received. “I’m not a traditionalist,” he clarifies. “I use traditional techniques. But so do cooking and dancing!” What could be more fresh than morning eggs? Than wedding songs?

Painting, for Carter-Fisher, is likewise a basic human activity. And human beings themselves remain a worthy subject. Portrait painting explicitly poses the Body at both ends of the brush, where there is much to be discovered.  “Painting is about coming to an understanding,” he told me. Choosing a pose for his subjects is as much about discovery as it is about orchestration. Indeed, the unifying theme of the collection on display did not emerge until many months of work produced multiple paintings. Despite the apparent risk, the works in the gallery resound together with a distinctive tone. The moments they capture are silent, yet simmering with disquiet. This air of estrangement is what Carter-Fisher sought to locate with the show title, Negative Shapes. 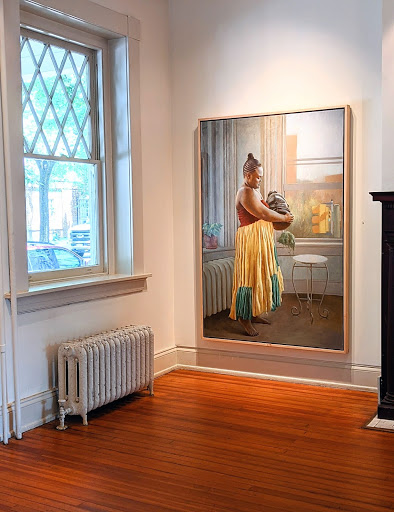 Some figures engage this tension more abstractly–perhaps as they bear some existential anxiety–while others are more apparently embedded in a broken relational narrative. One poignant image features the artist’s sister as a model, standing alone in an upper story apartment, cradling an African bust that bears her resemblance. With it, the viewer is invited to enter into that deeply felt sense of connection to a heritage that is yet irreconcilably distant.

There is a self-aware tension that bends away from irony in the act of making 21st century figurative paintings. There is tension in the psychological malaise of those figures presented. Yet more, there is another kind of tension between the insistent “incompleteness” characterizing Carter-Fisher’s show and the manner in which the images are handled with paint. Even while some paintings stand out as more striking than others, they are all uniformly composed with patience, care, and dedicated craftsmanship. They exhibit the dignity and beauty characteristic of the human form when it is thus rendered. They are, in that sense, complete. This last tension enacts the coexistence of brokenness with an incontrovertible, complicated hope. Therein, I surmise, lies the strength of the exhibition. 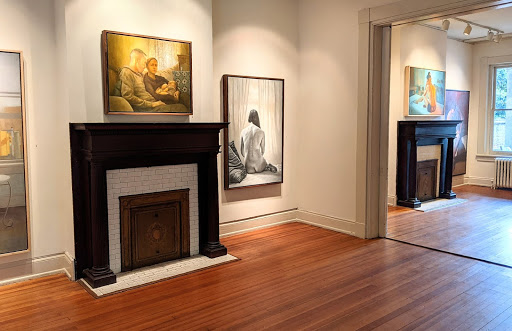 Negative Shapes is on view at Eric Schindler Gallery, 2305 E Broad Street, during open hours or by appointment until July 9th, 2021.